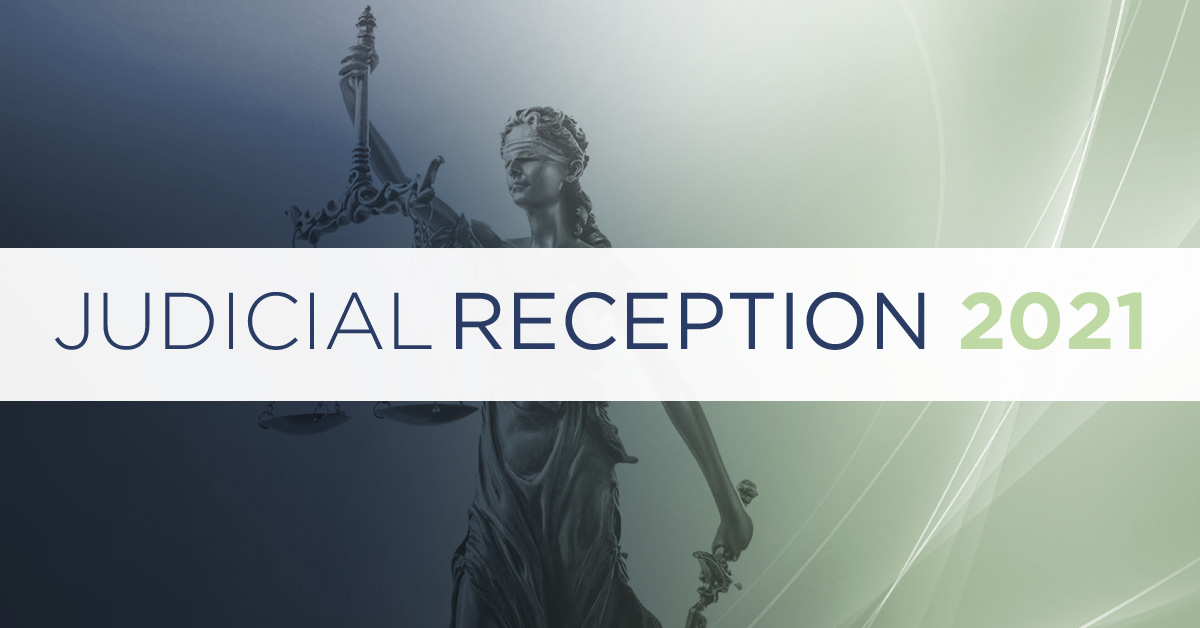 Judge Hooton, the award’s namesake, became the first woman elected to the Cook County bench in 1976, the same year she served as WBAI president. Denied support by the Democratic Party because of her gender, Hooton instead ran as an independent and won, serving for 16 years.

WBAI’s current president, Power Rogers LLP partner, Kathryn L. Conway, said the award is both about honoring those from the past and those championing women in the legal profession today.

“Each year we look for judges who are respected on the bench by attorneys and other jurists, and who blazed their own trail — living up to Mary Heftel Hooton’s legacy,” Conway said. “Our honorees this year all command respect from their peers and have risen to leadership positions in their various roles on the bench.”

All five honorees currently sit or previously sat on the Cook County bench. Evans highlighted their individual successes and characteristics.

“To serve with them down through the years has been a distinct honor and rare privilege that I cherish,” he said. “I look forward to continuing to see their success and I am pleased to see them being recognized and honored today.”

During the virtual program, more than 400 guests viewed recorded interviews with each of the honorees, conducted by members of the WBAI.

“I think it’s a reflection of how much impact they’ve had and their influence that so many people would show up, even virtually, to honor them,” Conway said. “It’s important to highlight judges doing good work, and to give them the extra attention that they well deserve.”

Alonso, a Cuban-born immigrant appointed by President Barack Obama to the Northern District of Illinois in 2014, said he was “surprised, confused, but thrilled,” when he received the call about the award.

“[Hooton] was a trailblazer, she was a benefactor of this organization, in a lot of ways [she was] responsible for the success of this organization,” Alonso said. “She was a great judge, she was a role model, in a lot of ways she led the charge to improve the way that the system treated our most vulnerable… I am truly humbled to receive this award.”

“It was exhilarating and terrifying,” Van Tine said of that experience 20 years ago. “I didn’t set out to be the first anything, I just wanted to become a judge… So along with getting appointed as an associate judge came the responsibilities to the community. I was acutely aware that I was representing women and Asian-Americans on the bench, but I just focused on doing the best job that I could.”

Last month, Van Tine was sworn in as a circuit judge. Demacopoulos’ goals were more set on proving something when she started her journey to the bench.

“After a time when I realized I had done everything I really wanted to do as a prosecutor, I decided I still wanted to do more in the courtroom so I decided to run for judge,” she explained. “But again, I ran into a ton of challenges. People told me that no Greek woman had ever been elected, which was true, that I had a terrible ballot name, which was true, I thought, and that I didn’t really have a lot of political networking at the time. But the more people told me that I couldn’t do it, the more I really strived to do it.”

Demacopoulos became emotional as she described the day she became a judge in 2008 as “a great day” for herself and her immigrant parents. “I know that Judge Hooton stood for an independent and qualified judiciary, and I’m hoping she’s looking down today and saying I’m worthy of this award.”

This is the third event the WBAI has held virtually since the start of the pandemic. The March 2020 judicial reception at the Chicago Cultural Center was among the last in-person events in Chicago’s legal community, coming one week before city and state officials imposed steep restrictions on gatherings.

A native of Chicago’s southwest suburbs, Jessie is a 2014 graduate of DePaul University with degrees in journalism and public relations. At DePaul, she worked for the campus newspaper as well as university-run radio and TV programs.