Virginia Becomes The 38th State To Ratify The Equal Rights Amendment So What Comes Next?

Virginia became the 38th state to ratify the Equal Rights Amendment (“ERA”) on January 27, 2020. The women of the Virginia House Delegates, which for the first time in its 401-year history is led by a woman, drove the movement. By joining Nevada and Illinois as the most recent states to ratify, in 2017 and 2018 respectively, Virginia finally pushed the Amendment passed its 38-state requirement (three-fourths of the states) to secure ratification.

The ERA provides that: “Men and women shall have equal rights throughout the United States and every place subject to its jurisdiction. Congress shall have power to enforce this article by appropriate legislation.”  A simple enough promise on its face, but one that has elicited nearly 100 years of passionate work both for and against this promise of gender equality.

The ERA was first proposed in 1923, but was not passed by Congress until 1972.  The states then had until 1979 to secure the required 38 ratifications.  Although the deadline was extended to 1982, that deadline came and went with only 35 states having ratified in time.

It was not until 2020, with Virginia’s vote, that the threshold was finally reached – 18 years after the Congressional deadline.  Although Representatives and Senators from both political parties have introduced legislation to extend the deadline with each new Congress, none of the resolutions have yet passed, leaving the fate of the ERA hanging in the balance. 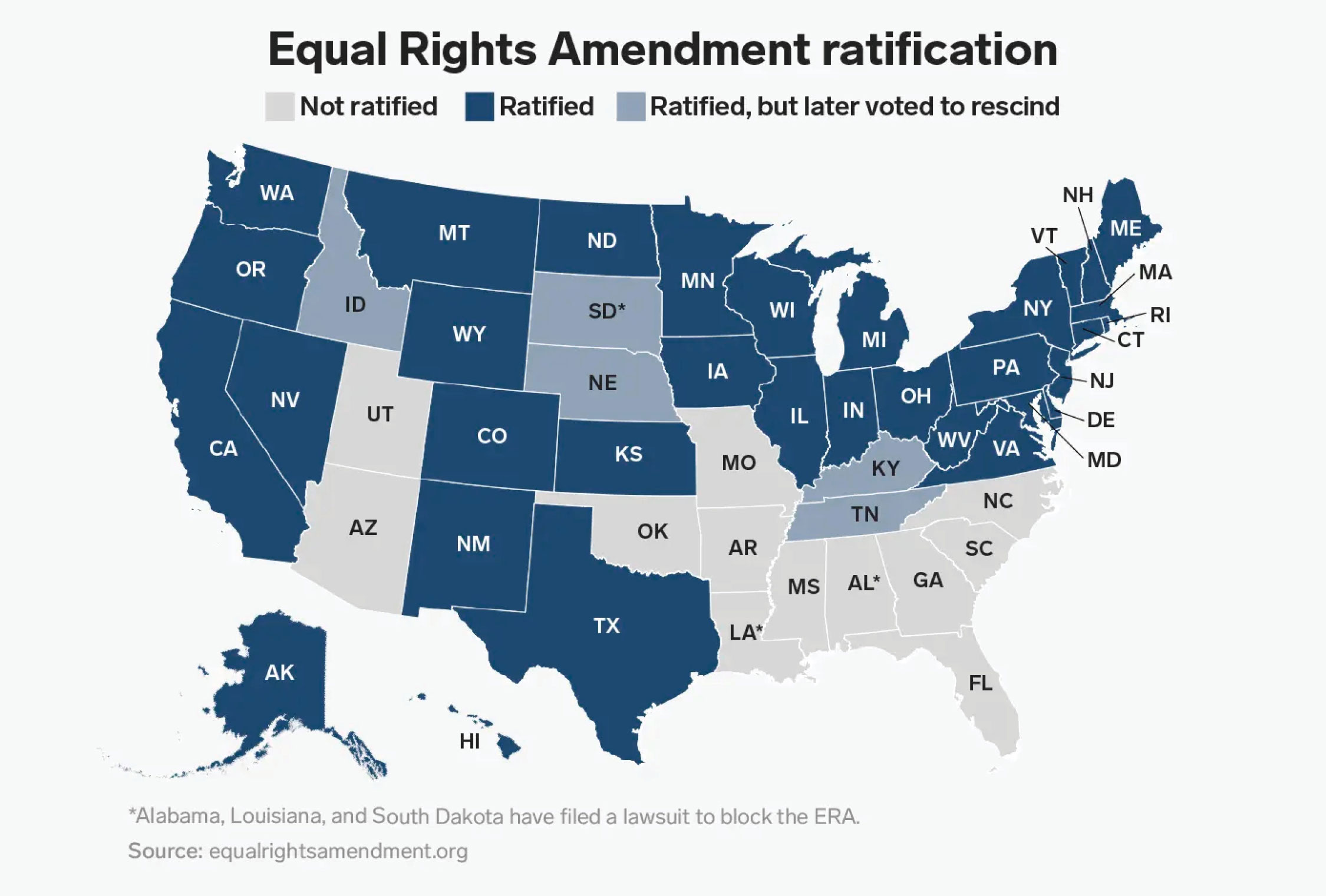 Those in favor of the ERA argue that now that the required 38 states have ratified, the Amendment automatically becomes law pursuant to 1 U.S.C. §106:

President Trump’s administration wasted no time taking action against the ERA.  On January 6, 2020, the Department of Justice issued a slip opinion concluding that the ERA resolution expired and, thus, the Amendment is no longer pending before the States and the votes for ratification are meaningless.  See, Opinions of the Office Of Legal Counsel, Vol. 44, a Memorandum for the General Counsel National Archives and Records Administration (www.justice.gov/olc/file/1232501/download).  With this opinion the DOJ is directing the National Archives not to move forward with publishing the ERA.  The National Archivist is heeding the President’s ruling, pending direction from the Courts.

Thus, the fate of the ERA continues to hang in the balance—at least for now.  On January 30, 2020, Illinois Attorney General Kwame Raoul, along with his counterparts in Virginia and Nevada, filed a federal lawsuit seeking to make the ERA law now that ratification has been achieved.  See, Commonwealth of Virginia, State of Illinois and State of Nevada v. David S. Ferriero, 20-cv-00242, Dist. D.C. (Jan. 30, 2020).  Given the divide in Congress, the ERA’s best chances for enactment seem to lie with the Courts.

Natalie Scruton Federle is Corporate Counsel at Outcome Health and specializes in employment law. Natalie is also a Director of the WBAI.