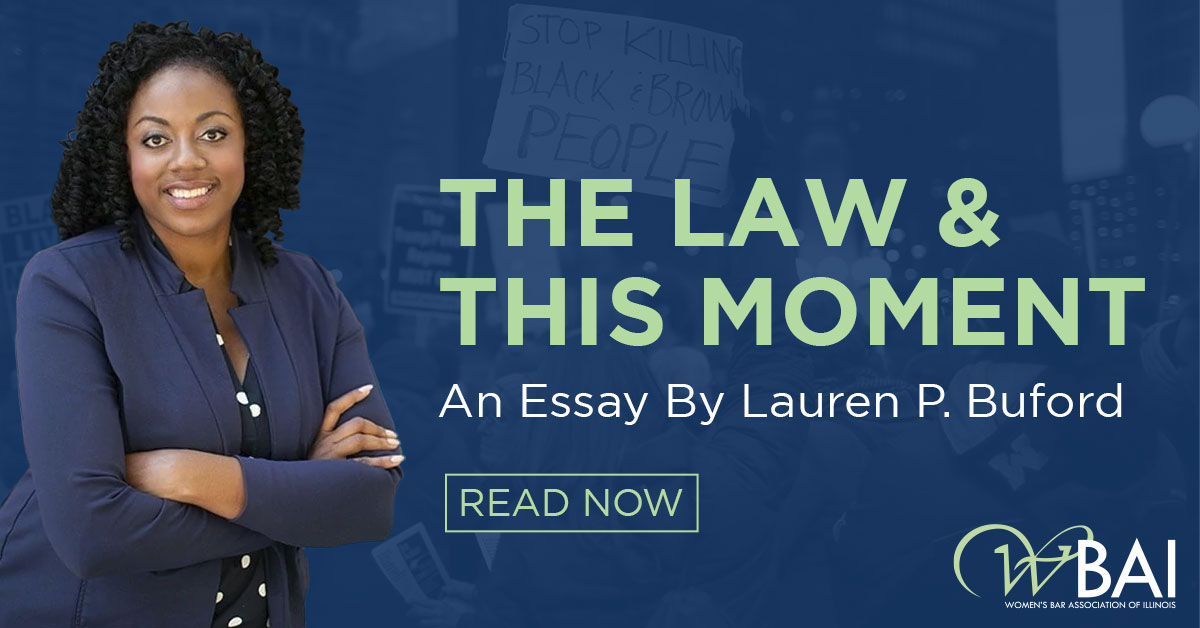 The Law & This Moment, an essay by Lauren Phyllis Buford

During a late night conversation, my mom and I were talking about the video circulating of the murder of Ahmaud Arbery. These daily hours long conversations had become commonplace during quarantine. With no place to go and additional free time, I found myself attempting to solve the world’s major problems with my mother who was thousands of miles away in California.

“What do you think can be done to change things?” My mother painfully asked.

I was silent and then sighed and blurted out, “Nothing. Nothing ever. There is nothing that any of us could ever do to make anyone care or for anything to change.”

The legal profession — a profession I truly love — is not necessarily founded on the tenant of vulnerability. For those reasons, I find myself compelled and utterly terrified to write about being a Black lawyer while the country has erupted into multiple weeks of anti-racism protests.

Around the time Los Angeles was aflame in 1992, my mother often reminded me that I had to be “twice as good to get just as far” as my white counterparts. I recalled the motto as I walked up beach with the rest of my mostly white collegiate rowing team. Passing a group of onlookers, I heard one woman remark to her husband:  “Well, it is certainly a change to see coloreds doing crew.”  Every fiber of my body wanted to confront the woman.  But, I understood that “twice as good” not only meant hard work but also burying my feelings. Because regardless of my diplomas or my resume, racism reduced me to adjectives rather than a fully formed human being experiencing justified emotions. Therefore, in order to excel, I was banned from exhibiting any behavior that would support the stereotypical version of a Black person.

Black lawyers have mastered the art of ignoring racist comments, microaggressions, absentminded ignorance and, even, overt racism. We perfected presenting an acceptable version of ourselves. Fully aware of the pervasive stereotypes of Black people, we worked overtime to mold ourselves so as to not appear “angry”, “standoffish”, “difficult” or “aggressive”. Despite our efforts, many of us are met with amorphous professional evaluations which critique our personalities instead of our work product.

Additionally, over the past decade, we have absorbed the countless deaths of Black people at the hand of police. From Oscar Grant to Trayvon Martin to George Floyd, these deaths have come in quick succession. And thanks to technology, many killings are captured on cell phones or broadcast on social media. However, despite the widespread dissemination of these deaths, we showed up to work and carried on. While each hashtag scooped out a part of our souls, we did not publicly grieve. As experts in muting our collective sorrow, we conducted business as usual.

In the span of forty-eight hours in early July of 2016, Alton Sterling and Philando Castille were killed by police. These deaths prompted a protest the next day in Dallas,Texas that ended with the deaths of five police officers. I recall closing my office door the following day and spending the day assuaging waves of tears. No one in my law firm mentioned any of the death that weighed on my mind. I began to accept that despite the videos, the creation of Black Lives Matter, the multiple protests, the endless trials and civil suits and ever-growing list of hashtags, this generational trauma could not leave my office. Just like all the other vestiges of racism ingrained in the foundation of the country, I realized although Black suffering was now being broadcast in high definition, that suffering still solely belonged to me.

And then George Floyd was killed on Monday May 25, 2020 by police officer Derek Chauvin. The video was viewed by millions all over the world. A white officer with his knee on the neck of a handcuffed Floyd for 8 minutes and 46 seconds.

Then I noticed something I didn’t expect. There appeared to be a shift in many white friends and colleagues, as well. Perhaps the global pandemic presented the perfect stage for this horrific moment. With many people isolated at home, our lives were paused. The image of Officer Chauvin — with his hands in his pockets and almost a smirk on his face — kneeling on the neck of Floyd was unavoided. A White man with his knee on the neck of a Black man. A macabre analogy for the original sin of this country. A physical manifestation of the inequities that persist to this day. There was no looking away. We all saw it. And now, we all must deal with what comes next.

The days that followed have been filled with protests, civil unrest, curfews, and deployment of the National Guard in several major cities. Terms like “antiracism”, “institutional racism”, and “White privilege” are permeating the discussion between everyone. For the first time, more voices — from companies to politicians to signs in many windows of my Logan Square neighborhood — were proclaiming that Black Lives Matter.

For Black people, the moment is disruptive, uplifting, disorienting, cautious, and full of so much possibility. And for Black Lawyers, the moment is filled with trepidation. It’s one thing to engage a White friend in a difficult conversation about anti-racism. It’s a much more arduous and delicate undertaking to initiate these conversations in a legal setting. Again, a profession impervious to vulnerability is, perhaps, not the easiest backdrop to tackle the issue of how systemic racism infects every facet on lawyering. While “business as usual” is normally the standard in all circumstances, should leaders in the legal profession engage their colleagues and workforce in difficult conversations about anti-racism?

Yes. The moment demands it. It is an inflection point. We are currently living out a critical chapter of a history book and how we behave now will determine whether the chapter ends in structural and systemic change or whether my prediction to my mom was correct. “There is nothing that any of us could ever do to make anyone care or for anything to change.” Every lost piece of my soul hopes I’m wrong.

Lauren Phyllis Buford is an attorney with Hughes Socol Piers Resnick & Dym, Ltd. Her practice focuses on the defense of hospitals, nurses, and physicians in medical malpractice matters. She joined the firm in 2018. Over the course of her career, she has obtained the dismissal of clients during the discovery phase of litigation, resolved disputed claims through mediation and successfully tried jury and bench trials.  In addition, Lauren is one of the Chairs of the WBAI’s Diversity & Inclusion Committee.