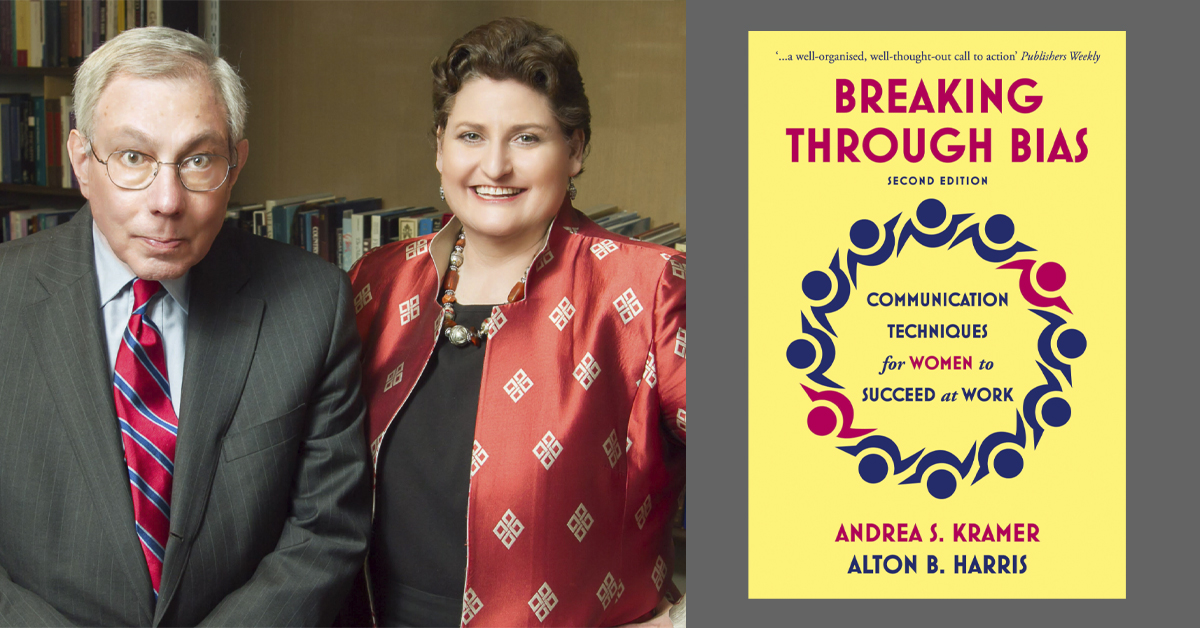 Reflections on the Second Edition to Our Book, Breaking Through Bias

By: Andie Kramer and Al Harris

When the first edition of our book Breaking Through Bias: Communication Techniques for Women to Succeed at Work was published in 2016, we focused on implicit (unconscious) gender bias and the ways that woman could communicate to avoid or overcome gender bias in gender biased workplaces. Since that time, we have watched dramatic changes—some positive, some negative—in the conversations about and positions of women in the workplace.

In the first edition, we focused almost exclusively on implicit gender bias. We assumed that explicit bias—the open, intentional, aggressive, and hostile expression of sexist and misogynistic views—was so socially unacceptable that it did not pose a serious threat to women’s careers. While that assumption may have been justified in late 2015 when we submitted our manuscript, Donald Trump’s presidential campaign and election have made it apparent that that assumption is no longer justified. Beginning with Trump’s campaign, the media has been flooded with crude, angry, and mean-spirited criticisms of women. Indeed, explicit gender bias has now become so prevalent that it poses a real and very severe threat to women’s career advancement. Our change of heart is nicely captured by Cheryl Strayed when she writes:

I’ve never been under the illusion that sexism had vanished, [but] before Trump was elected there was a history-lesson element to the stories I told of my first consciousness about what it meant to be female in America, a quality that had made the sexism I experienced as a girl seem antiquated and nearly extinct. The message was: This is the way it used to be! Isn’t that amazing? In witnessing the presidential campaign and Trump’s eventual election, I’ve concluded that I had it wrong. This isn’t how it used to be. It is the way it is . . . . This election wasn’t simply a political contest. It was a referendum on how much America still hates [strong, ambitious] women.

Explicit gender bias exists on a continuum of discriminatory gender-specific behaviors that includes implicit gender bias, incivility to and microaggressions against women, inappropriate sexual comments, unwelcomed touching, actionable sexual harassment, and criminal sexual assault. As we wrote in an article in the Harvard Business Review, these discriminatory behaviors are all related and interconnected so they need to be “addressed collectively, because sexual harassment [and other forms of explicit gender bias are] far more likely in organizations that experience offenses on the ‘less severe’ end of the spectrum than in those that don’t.” Our focus on implicit gender bias remains highly relevant in the second edition. Misogynistic criticism of women striving to achieve true gender equality is tolerated only when there is a pervasive, unconscious assumption that women are somehow less capable, less qualified, and less entitled to play leadership roles than men. As a result, to effectively attack explicit gender bias, implicit gender bias must also be attacked. And that, of course, is precisely the objective of Breaking Through Bias.

In the second edition, we rolled up our sleeves once again to tackle workplace biases. Our focus remains on what women can do on their own right now, today, to improve their career prospects despite the presence of gender bias. Ambitious, talented women should not have to wait for large-scale structural or organizational changes to achieve career success. There are a great many things women can do now to avoid or overcome the discriminatory consequences of gender bias. We lay out tools and techniques women can use despite gender bias to make their own careers more successful, satisfying, and sustainable. Effective use of these tools and techniques depends on women’s ability to identify the stereotypes and biases held by the people who maintain the checkpoints and gatehouses on their career paths. By managing the ways in which women interact with their career gatekeepers—whether in person or while working from home—women can manage the impressions they make through what we call attuned gender communication. Women can avoid, disarm, or overcome—break through—gender bias today.

Gender bias experts Andie Kramer and Al Harris have been combatting gender bias through writing, speaking, and mentoring for over 30 years. Andie is a partner at an international law firm. Alongside her demanding legal career, she has become a nationally known advocate for women’s advancement. Al was a founding partner of the Chicago law firm of Ungaretti & Harris, which in 2015 merged into a large national law firm. Andie and Al are active members and supporters of the WBAI.