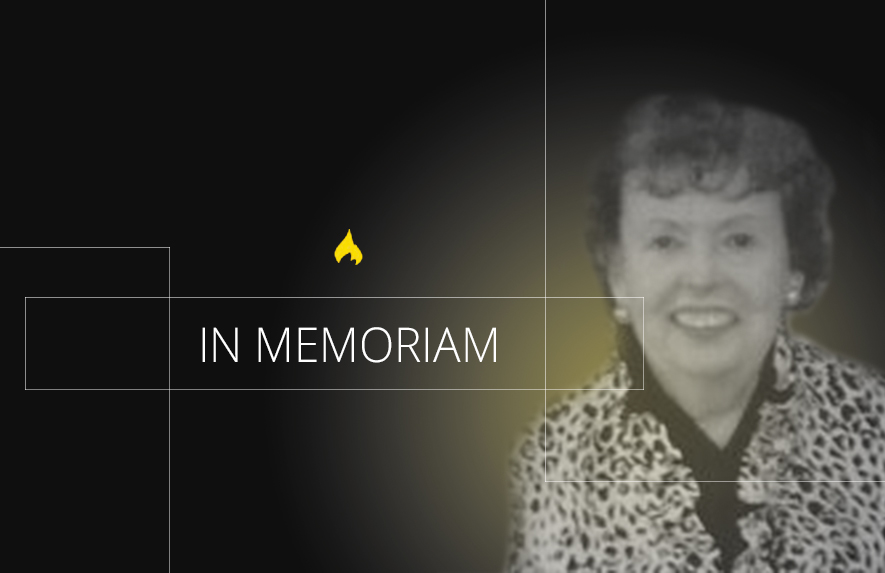 I met Pat Mullin in 1970-71 when she was the WBAI president, and thereafter at numerous WBAI events, which she faithfully attended. Patricia “Pat” E. Mullin was born on August 13, 1926, in Dubuque, Iowa, where she died at age 90 on April 4, 2017. She received a B.A. in biology, completed an internship in medical technology, became a blood bank technician, and then decided to go to law school. She worked fulltime at St. Anne’s Hospital in Chicago as the head of the blood bank, while earning her J. D. from DePaul University Law School. Pat was working at St. Anne’s Hospital when a fire broke out at Our Lady of Angels Elementary School on December 1, 1958. St. Anne’s received 96 of the young fire victims. It was one of the worst fires in U.S. history. Pat said she would never forget the horror of that day and the months that followed.

Upon receiving her law degree, Pat worked for the John D. MacArthur Company, principally Bankers Life and Casualty Company, in Chicago. She began her career in the Claim Legal Department, but was transferred to the Corporate Legal Department after 18 months. She completed the necessary requirements to receive her C.L.U. Degree (Chartered Life Underwriter), F.L.M.I. (Fellowship in Life Insurance with a specialty in Pension Planning) and Ch.F.C. (Chartered Financial Consultant). She became the Vice President of the Corporate Legal Department, Corporate Secretary and Senior Counsel for Bankers Life.

Pat was admitted to the Illinois and Iowa bars, and was the only woman to sit for the Iowa bar exam in June 1960. The event was such an anomaly that the results were announced on the radio statewide as “99 men and 1 woman, Patricia E. Mullin of Dubuque, Iowa had been admitted to the Iowa Bar”. From 1963 to 2012, Pat served as a Director of the WBAI Foundation.  She served as a Commissioner of the Illinois Supreme Court – Character and Fitness Committee. From 1985 to 1990, she was a director for the National Foundation for the study of Equal Employment Policy in Washington, D.C. She was elected as the first woman Chairman of the Equal Employment Advisory Council, Washington D.C., 1986 – 1987.  After retiring from Bankers in March of 1994, Pat worked as an arbitrator from 1994 until Friday, April 19, 2013, when she did three final arbitrations and retired to Dubuque.  Patricia enjoyed traveling, and toured Ireland, England, France, Italy, Poland in addition to many other countries. She loved playing bridge and once defended against Omar Sharif at the Ambassador West in Chicago.

During Pat’s presidency, WBAI voted to file an amicus brief in support of the federal lawsuit, Greenfield v. Field Enterprises, Inc., filed on behalf of NOW and the ACLU by Charlotte Adelman and Sheribel Rothenberg challenging the major Chicago newspapers for acting as employment agencies by running sex segregated help wanted ads, thus violating Title 7 of the Civil Rights Act. WBAI’s brief, written by Carol M. Peterson, Helen Hart Jones, Stephane Kawit and Loretta Didzerekis (now Douglas), was also brought on behalf of the Illinois Federation of Business and Professional Women’s Clubs and Women’s Equity Action League. Carol Kipperman, counsel for the EEOC, filed a brief in support of WBAI’s position. President Mullen urged Senator Charles Percy to appoint the first woman to be a Senate page. She noted in her WBAI 75 bio, that three of “our members were elected as delegates to the Constitutional Convention, and they kept us advised of their activities. They spoke before the group and helped us to decide on the adoption of the revised Constitution and especially the four sections that were left to the general public.” Pat’s memory of her presidency’s “most gala” event “was our reception for the Consular Corps. It was a lovely and interesting affair. I was pleased to preside at the program for the reception for new citizens. All in all it was a delightful year!”