Our third president, Catharine Waugh McCulloch, was a true champion of women’s rights.  An 1886 graduate from Union College of Law in Chicago (now Northwestern Pritzker School of Law), McCulloch served as President of the WBAI from 1916-1920.  Her WBAI terms oversaw the passage of the Nineteenth Amendment to the U.S. Constitution, which established nationwide the right of women to vote 100 years ago.  McCulloch also played an instrumental role in Illinois’s suffrage history working countless hours in the creation and dissemination of legal education and awareness for the public and politicians, drafting legislation, and leading organizations to help effect change.

From 1890 to 1912, McCulloch headed the legislative committee of the Illinois Equal Suffrage Association.  During this time, McCulloch drafted the key legislation and spent 20 (yes, 20!) years lobbying Springfield and working to have it enacted.  She started in 1893 with a whistle-stop train tour through the state.  Years later, with the growth in popularity of the automobile, the association organized a “Suffrage Automobile Tour” during which members would park in town squares and on street corners with McCulloch speaking from a car on the legal aspects of women’s suffrage.  McCulloch’s dedication and perseverance paid off.  After collecting the opinions of other lawyers on the constitutionality of the suffrage bill, McCulloch delivered them to Governor Edward F. Dunne to persuade him to sign it.  And he did.  The Presidential and Municipal Suffrage Bill passed in 1913, and Illinois became the first state east of the Mississippi to give suffrage to women.  It provided that women could vote for all offices, except where the Illinois Constitution required male electors.  This meant that women could vote for the president and for local (but not state) officials.

Illinois’s Ratification of the 19th Amendment

Not one to rest on her laurels, McCulloch pushed for an amendment to the Illinois Constitution, as well as to the U.S. Constitution.  She helped found the National American Woman Suffrage Association (which later became the League of Women Voters) and was its legal adviser and vice president.  In 1916, McCulloch became President of the WBAI and led the organization as it worked for adoption of the Nineteenth Amendment to the U.S. Constitution, establishing nationwide the right of women to vote.  On June 10, 1919, as the Illinois legislature voted to ratify the amendment, McCulloch was in Springfield, sitting in the gallery of the House, counting the votes.  Illinois had raced to become the first state to ratify.

Alas, somehow someone had written in the introduction to the ratification resolution the words “events and purposes” instead of the legalese “intents and purposes”.  Using an abundance of caution, on June 17, 1919, Illinois re-ratified the amendment.  But by then, six more states had also ratified it.  Nevertheless, because the error was so minor, Illinois still calls itself the first ratification state.  And now we are celebrating the 100th anniversary of the ratification as well as the WBAI’s significant ties to the event.

The Illinois Constitutional Convention that convened in January 1920, adopted an article giving full suffrage to Illinois women and on August 26, 1920, upon ratification by Tennessee, the Nineteenth Amendment to the U.S. Constitution was in effect. 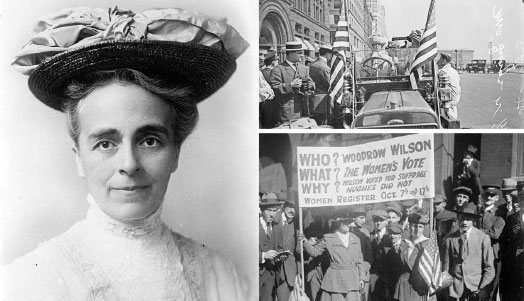 After her admittance to the Illinois state bar and establishing her law practice, Catherine Waugh married her former law school classmate, Frank Hawthorn McCulloch, and the two merged practices, forming McCulloch and McCulloch in Chicago.  Much of her practice focused on advocating to remove discrimination against women from marriage and divorce laws.  She also represented many women with problems relating to divorce, child custody, domestic violence, and discrimination in wages.

The McCullochs lived in Evanston with their four children.  McCulloch’s early suffrage work saw the passage of legislation giving women equal rights in the guardianship of their children in 1901 and raising the age of consent for women from 14 to 16 in 1905.  In 1907, she was elected (by an all-male vote) as justice of the peace in Evanston, the first woman justice of the peace in Illinois.  She was re-elected in 1909.  While serving as justice of the peace, it was reported that she performed marriage ceremonies and omitted the word “obey” from the marriage vows expected of women.  These were traditionally stated as “love, honor, and obey” for women while men stated “love, honor, and cherish”.  McCulloch was later appointed a master in chancery of the Superior Court of Cook County in 1917.

McCulloch was also a prolific writer and her works include Mr. Lex, a novel that focused on the legal disadvantages facing women and mothers; as well as several publications highlighting the law and advocating for equality for women:  Illinois Laws Concerning Women; Women Suffrage Law; Women May Be Justices of the Peace; and Chronology of the Woman’s Rights Movement in Illinois.  In 1929, she and her husband wrote A Manual of the Law of Will Contests in Illinois.  In an effort to tackle religious questions relating to suffrage McCulloch wrote Bible Light on Woman Suffrage, saying:

Women should be joint guardians with their husbands of their children.  They should have an equal share in family property.  They should be paid equally for equal work.  Every school and profession should be open to them.  Divorce and inheritance should be equal.  Laws should protect them from man’s greed by limiting the hours of woman’s labor, and protect them from man’s lust by punishing severely vile assaults on women.  Troubled childhood should be safeguarded.  All these desirable reforms can only come through the vote of women, and such laws have been passed where women vote.

McCulloch regularly opened her home for social activities and summer outings of the WBAI.  By 1940, she and her husband had been lawyers for 50 years and were designated “Senior Counselors” by the ISBA.  McCulloch died in 1945 from cancer at age 82.  In February of 1946 the WBAI and Northwestern University set up a fund to purchase books for the law library in her memory.  The Catharine Waugh McCulloch Park in Evanston (on Livingston Street between Broadway and Eastwood Avenues) stands as a living tribute to a courageous and accomplished woman who fought tirelessly for fairness and equality.

Elsie G. Holzwarth, now retired, was a sole practitioner in Chicago and has been a long-time member of the WBAI.