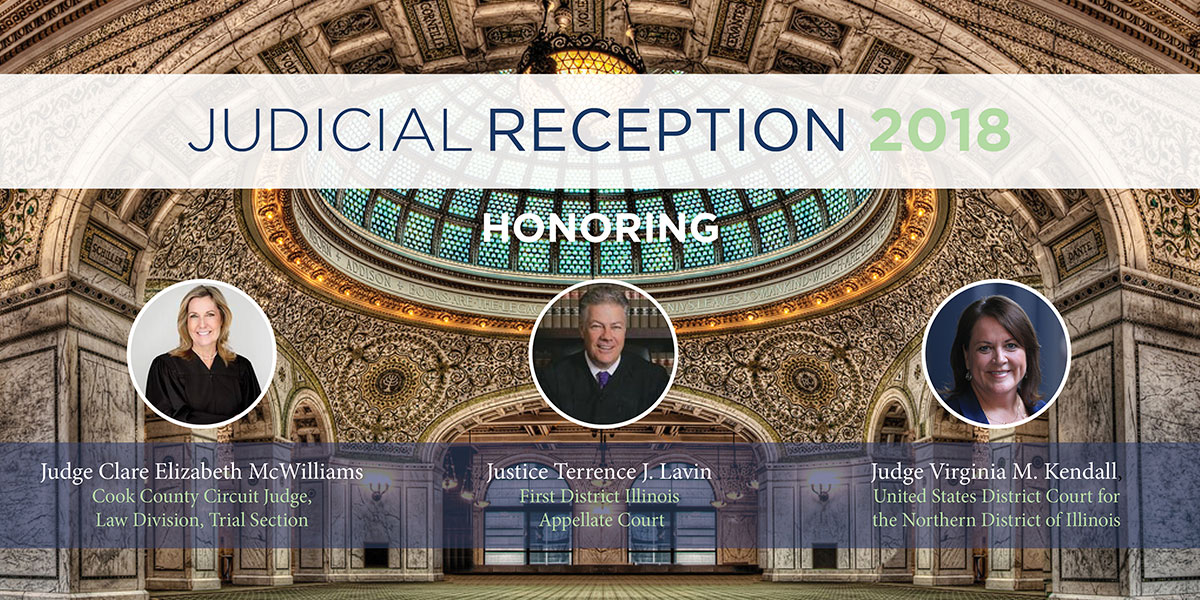 On March 1, 2018, the WBAI hosted its annual Judicial Reception at the Chicago Cultural Center. In one of Chicago’s most beautiful venues, over 600 members of the legal community came together to celebrate the accomplishments of three exceptional Illinois judges.

This year’s recipients of the Mary Heftel Hooton Award included Judge Clare Elizabeth McWilliams of the Cook County Circuit Court – Law Division, Justice Terrence J. Lavin of the First District Illinois Appellate Court, and Judge Virginia M. Kendall of the United States District Court for the Northern District of Illinois. The recipients were honored for their accomplishments within the profession, as well as for their work on behalf of advancing the careers of women.

The award’s namesake, Judge Mary Heftel Hooton, graduated from DePaul University Law School in 1943, and was in private practice for many years before being elected a judge in 1976. Denied the backing of the Democratic Party, Mary Heftel Hooton ran as an independent and was endorsed by all three Chicago metropolitan newspapers. She was President of the WBAI from 1976-1977. In 1993, she generously bequeathed her estate to the WBAI which enabled the WBAI to acquire its current offices at the Chicago Bar Association Building (321 S. Plymouth Court, Chicago, Illinois).

The Judicial Reception Committee began planning for the event months in advance. The Committee was made up of WBAI members, law students, and WBAI board members. Indeed, the Committee’s hard work paid off as this year’s Judicial Reception was sold out, with a record-breaking number of attendees and sponsors. Kristen Lukaszak, one of the event’s co-chairs, attributed the success of the event to “the dedication of the Committee members to see the event succeed, and the support of the legal community wanting to honor the three great recipients of the Mary Heftel Hooton Award.” Co-chair Dina Ninfo added that she was “happy to see so many first-time Committee members contribute new ideas and work hard to make the event so successful.”

Courtney E. Lindbert is an attorney at Cunningham, Meyer & Vedrine, P.C. where she focuses her practice in the areas of medical malpractice defense, commercial litigation, and long-term care defense. She has been a WBAI Board Member since 2016, and co-chaired this year’s Judicial Reception.